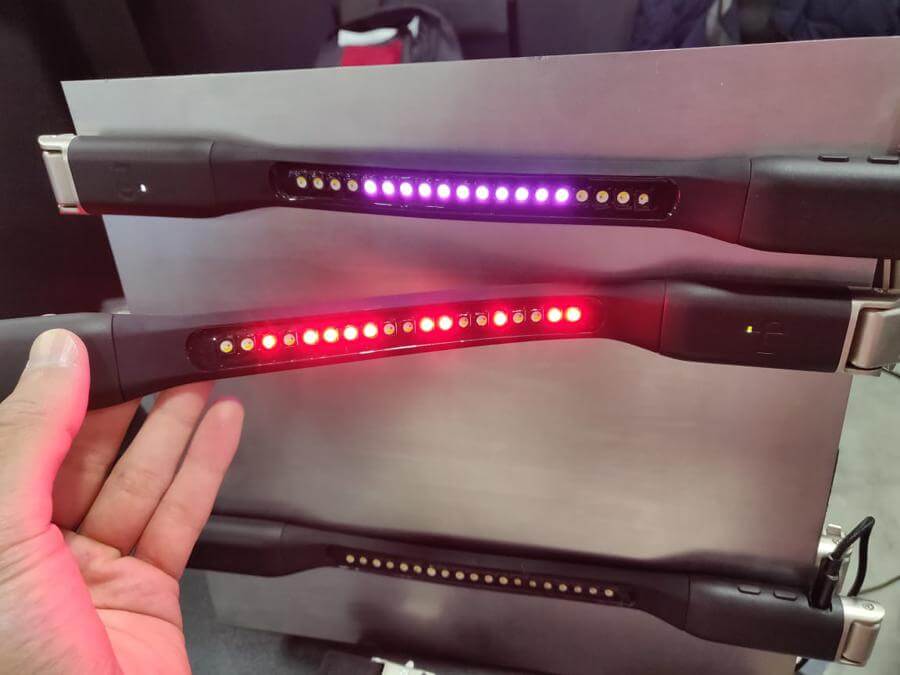 While I was at CES 2022, I saw a very cool utility flashlight. It was super bright, touch capacitive, magnetic and looked very futuristic. I tested the product and was impressed. It is called Jordilight and it is made for everyone, be it a bike rider, hiker, hunter, the list goes on. 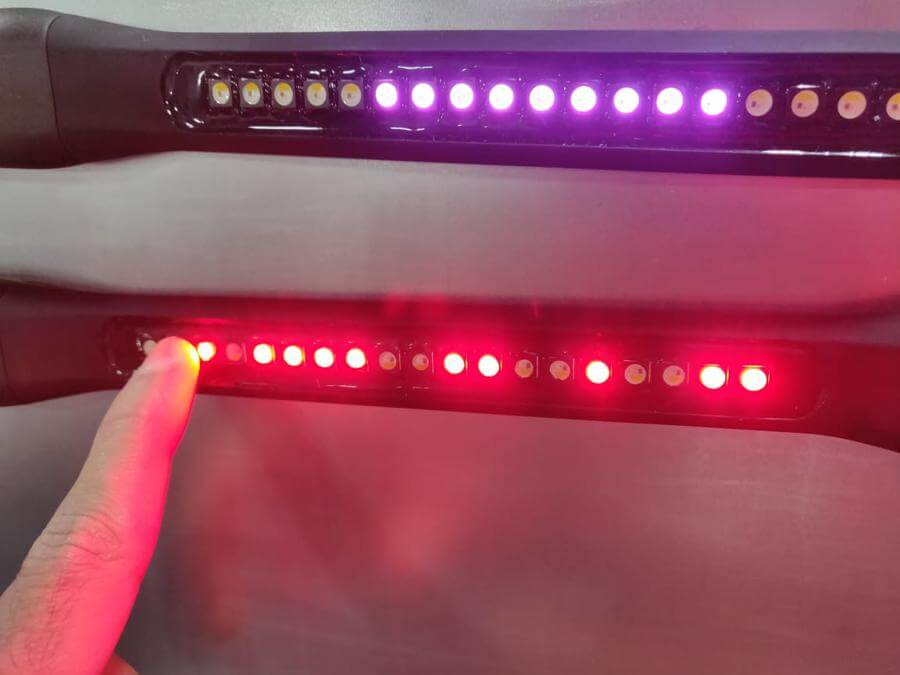 Jordilight is equipped with 19 multi-colored LEDs and each LED can be controlled independently. All those LEDs are touch capacitive meaning you can touch an individual LED to turn it on or off. 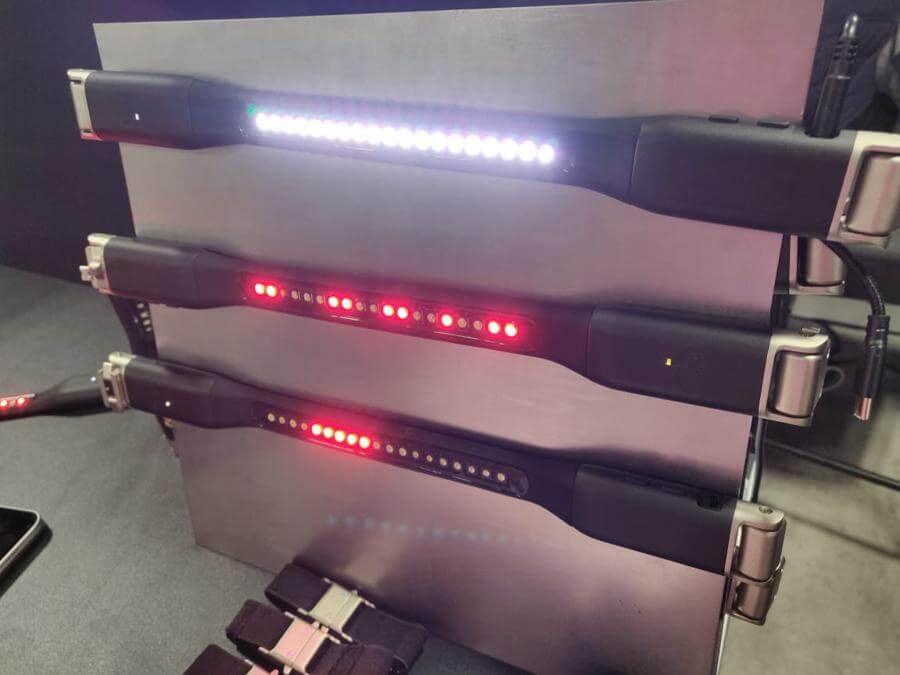 The flashlight is very bright, 3600 lumens to be accurate. It is wirefree and has a rechargeable battery. The battery lasts about 4 hours on max brightness (i.e on 3600 lmn) and about 9 hours on normal use. 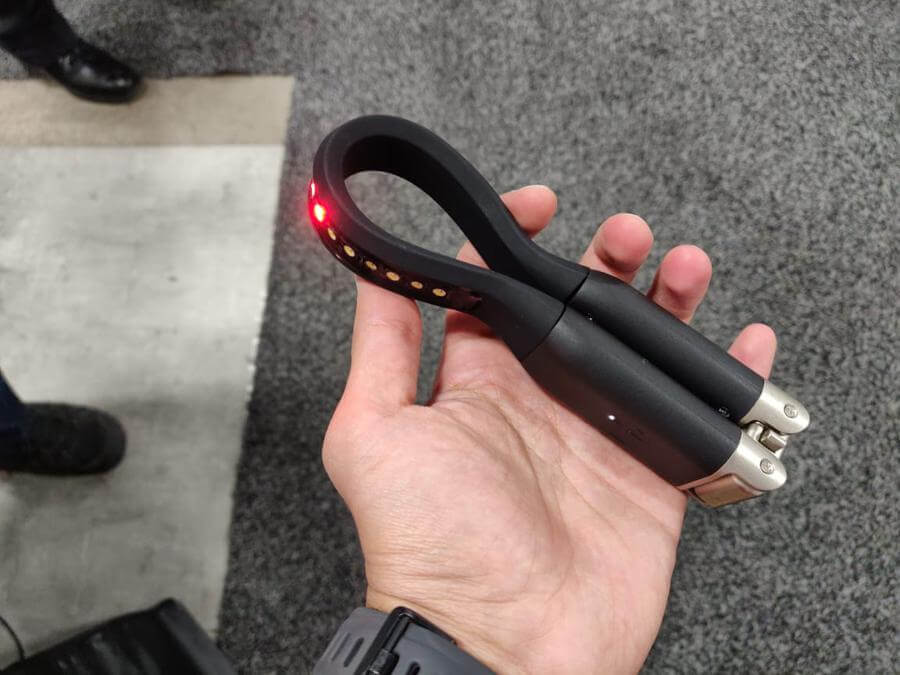 Jordilight is magnetic. You can twist and turn it, attach both ends together, attach them to any magnetic material and do a lot more fun stuff. 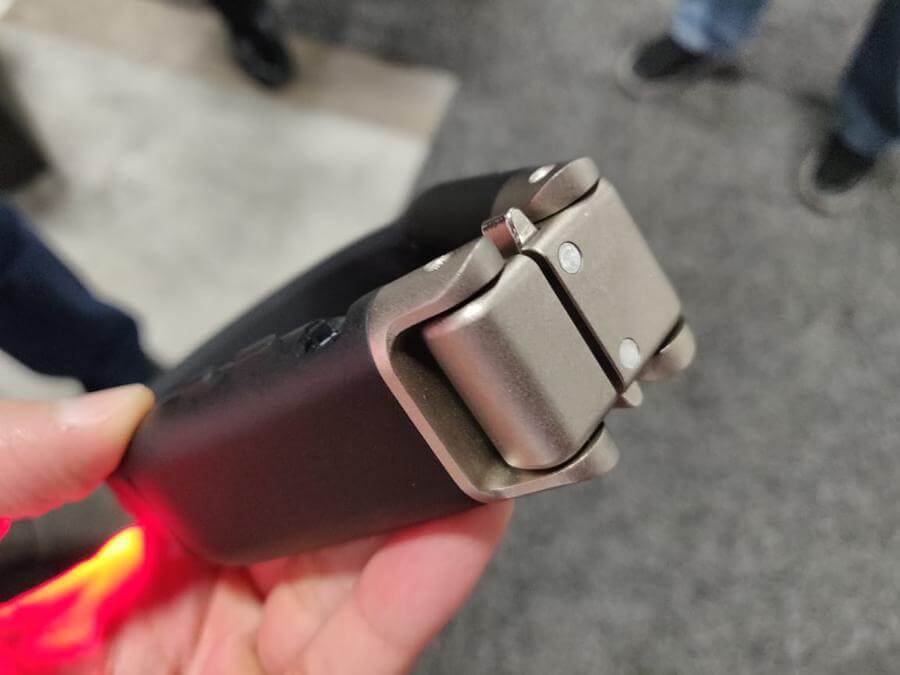 The product is also IP68 water-resistant which can be carried to a depth of 50m…insane! The next time you go deep water scuba diving, take this one with you can capture some stunning videos. 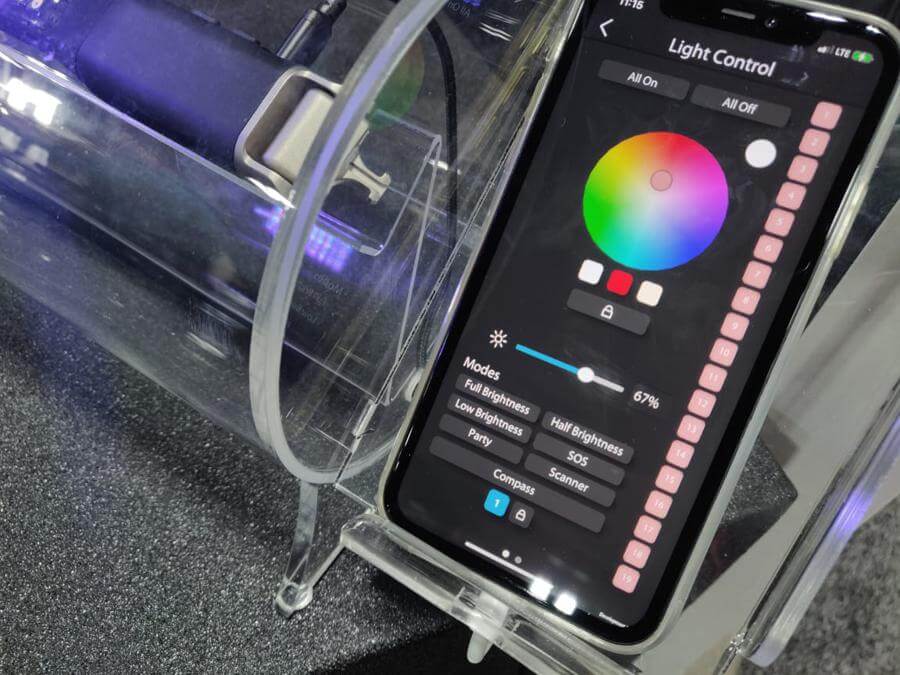 Jordilight connects to your smartphone and has a dedicated app through which you can control the colors, patterns and whatnot. The app itself is very cool. Another cool feature is that the band has a gyroscope inside it and can be used as a compass. If you set it to compass mode, the lights organize themselves to indicate the direction. It was so cool to see. 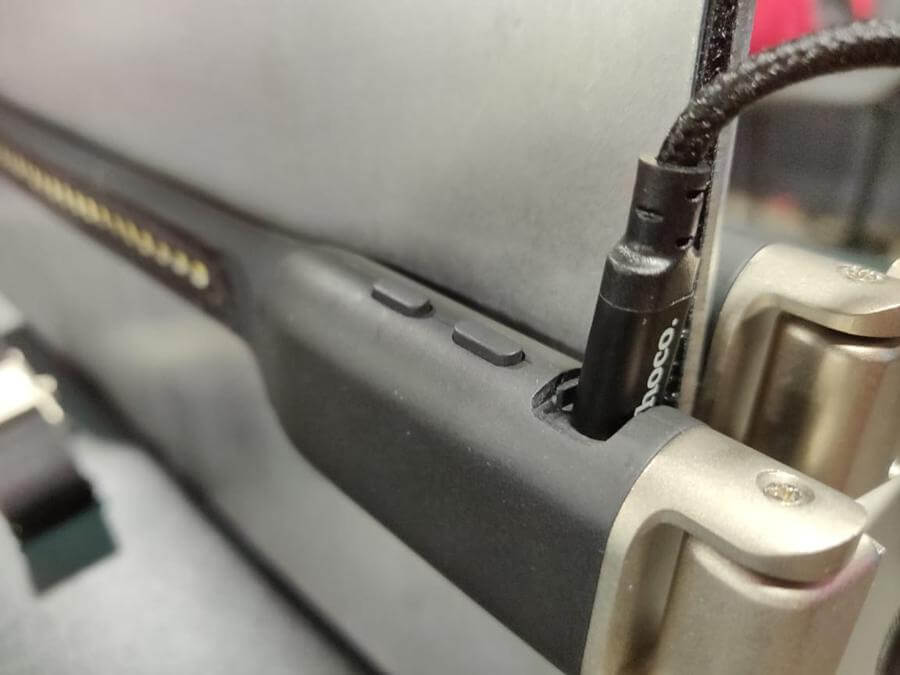 The 2500 mAh battery can be charged through a USB C input and takes about 1 hour 45 minutes to fully charge. You can also get accessories that let you wrap this band around your head or arm. 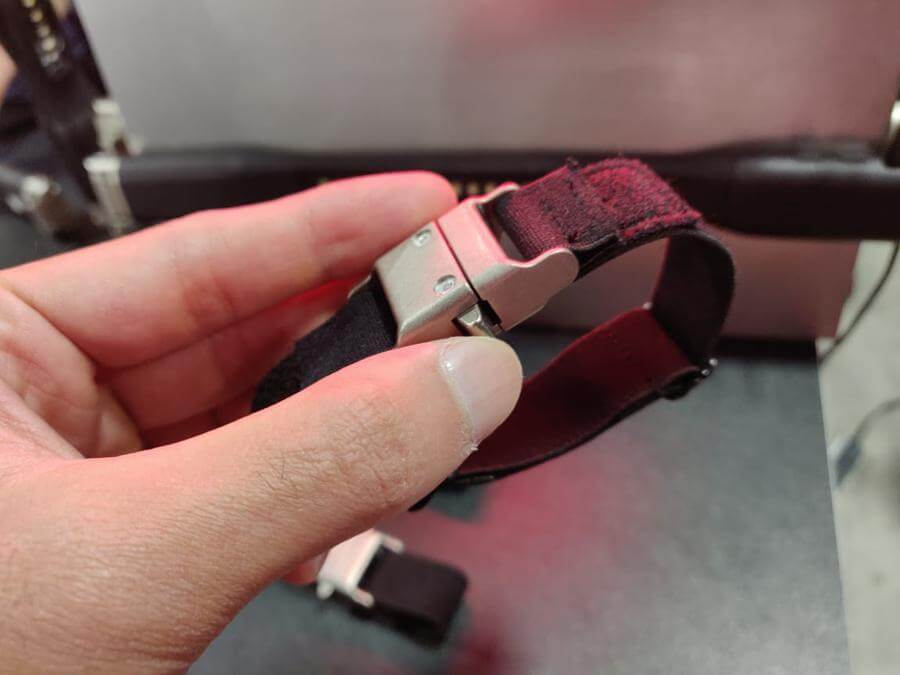 Jordilight will be launched soon on Indiegogo and it is expected to be priced at around $89 which is decent. Quickview
Nix – Portable Washing Machine with Dryer
DateJanuary 7, 2022 CategoryCES 2020, Cool Gadgets, Smart Home Devices TagsPortable Clothes Dryer, Portable washing machine, smart washing machine, washing machine for underwear
If you ever wanted to own a portable washing machine with a dryer, look no further. Meet Daily Neaty NIX, the smallest drum washing machine dryer for small clothes. As mentioned, this not only washes the clothes but also dries them fully so you can wear them right away. Let us see some of its cool features. Washing + Drying Normally you wash your clothes first and then dry them by manually putting them in the dryer. But with NIX, you don't have to do that. It first washes and then dries the clothes automatically with no human intervention. Smart Device NIX connects to your smartphone and they have a smartphone app through which you can control or access the device and its data. It supports voice control too. Works with any Detergent This portable washing machine works with any detergent brand/ type but they do sell their own detergents if you want. They sell the
Check It Out Quickview
Scribit : Turn your wall into a Wonderwall
DateSeptember 15, 2018 CategoryCool Gadgets, Crowdfunding Campaigns TagsPainting Gadget, Scribit Gadget
Scribit is a cool gadget that could write text or draw patterns on your wall. It uses a string to move around while drawing on any hard surface. This gadget will be super useful for people who love to decorate their house every now and then.
Check It Out Quickview
Duex Lite & Duex Plus Portable Dual-Screen Laptop Monitors
DateMarch 15, 2021 CategoryCool Gadgets, Crowdfunding Campaigns, Gadgets for Men Tagsdual screen laptop monitor, portable laptop monitor
Laptops are great devices for multitasking, but there are lots of users who wish that it was more convenient to switch between programs. That’s why it is possible to use a second monitor with your laptop. A secondary display provides for easier and faster switching between multiple programs for better productivity. But that is still not enough. Since laptops are devices that you can use while on the go, it would be impressive to have a portable monitor. That’s the inspiration behind the Duex Lite and Duex Plus portable laptop monitors from Mobile Pixels. If you aren't aware, Mobile Pixels have been producing some of the best portable laptop screens. Read my coverage on Trio monitor here. With breathtaking features and a sensational story behind them, these monitors are what every student, exercise enthusiast, gamer, and every other multitasker needs. What are the main features of the Duex Lite? The Duex Lite has the
Buy Here Quickview
Apeman Seeker – A Smart Bike Accessory
DateJanuary 14, 2022 CategoryCES 2022, Cool Gadgets, Outdoor Gadgets TagsApeman Seeker Action Camera, Apeman Seeker F1, Apeman Seeker R1, Smart Action Camera
If you are looking for a cool bike gadget that can do a lot of things, you are in the right place. While I was at CES this year, I came across this bike accessory called Seeker by Apeman. It is a front and rear action camera for your bike, a tail and headlight and a laser lane indicator. Let us know more about the product. Seeker is available as both front and back attachments. Seeker F1 is for the front and S1 is for the back of your bike. The camera housing is where you have the light indicators. The back attachment has an orange tail light and the front one has a white one. The tail light is pretty smart. It flashes when you brake or accelerate quickly. This is a safety indicator too. The action camera is the heart of this gadget. This Apeman action camera has a dual-screen,
More Info Here Quickview
FARO by UNIT 1: A Sleek, Visibility-First Smart Helmet
DateOctober 21, 2020 CategoryCool Gadgets, Crowdfunding Campaigns, Gears for Sports TagsFARO by UNIT 1, Smart Bike Helmet, Smart Helmet
Not so many bikers and skateboarders love wearing helmets, simply because they think of them as ugly and cumbersome. This is a problem that has been solved by the FARO Smart Helmet by Unit 1. Features The FARO Helmet is a practical bike helmet that features a unique, sleek, and modern design that is aimed at ensuring that you remain visible while on the road. It has amazing features such as a state-of-the-art light system, fall detection, and MIPS all of which are aimed at enhancing your riding experience. The helmet features a design with effective ventilation, for a more comfortable ride. To ensure that you are not limited in any way, Unit 1 has included waterproof capabilities to this smart bike helmet, giving you the flexibility to ride even in the middle of a storm, if you want to. The sleek, simple, and clean design of the helmet is something that will make
Buy Here Quickview
Sphero Specdrums – Musical Rings with Play Pad
DateJanuary 14, 2022 CategoryCool Gadgets, Gadgets for Kids, Gadgets Under $50 TagsCool Specdrums, Gadget for Musicians, Music Gadget, Sphero gadgets
Sphero has a range of cool gadgets for kids but this one looks great for not only kids but also a music lovers. Meet Sphero Specdrums, a cool music accessory that you can wear. Specdrums are nothing but rings that you can wear. Unlike other rings, these connect to your smartphone and detect color! This is how it works, you wear it, pair it with your phone, tap the ring onto a colored surface and voila, you will hear a sound. Based on the color you are tapping, you will hear different sounds. You can use it on any colored surface. Specdrums connect to your phone via Bluetooth and are battery-powered. The batteries are rechargeable via USB. Takes about an hour to fully charge. You can use these rings with both Android and Apple devices.   The product also comes with a play pad. The pad is nothing but a colored surface. Instead of
Buy Here Quickview
ChargeTech 27000mAh 85W Power-bank
DateOctober 12, 2018 CategoryCool Gadgets, Gadgets for Travelers , Gadgets on Amazon, Smartphone Accessories
ChargeTech has come up with a unique portable multipurpose power bank that can charge even laptops along with your mobile phones, tablets, earphones and cameras. The capacity of this powerbank is 27000mAh 85W / 110V and is even approved for Airline travel. It consists of Panasonic and Sanyo lithium-ion battery cells and is safe to use. It comes with intelligent fast charging technology which can deliver 2.4 FULL amps to your devices for rapid charging. Its weight is about 2.5 pounds which makes it portable. Related Read: 10 Best Power Banks for Everyone
Buy Here